Good morning,
I apologize for the long delay in providing an update on SeaHawk but it is certainly not due to a lack of nearly continuous activity on all aspects of the mission. As I mentioned towards the end of my earlier message (https://oceancolor.gsfc.nasa.gov/forum/ ... ?pid=44266 ) describing the first HawkEye image that we received, since that time we have continued to work towards what we anticipate should soon be the transition into "routine operations" and away from the more laborious and less predictable commissioning phase that we have been engaged in since launch. We have certainly learned a great deal and after a recent post-launch workshop that we held earlier this month to review the current status of the mission and to develop the schedule and to plan for the remaining activities and testing that is needed, we are all pretty optimistic that the next two months will get us to that point. During the previous few months we have been conducting a great many on-orbit tests, concentrating mainly on characterizing the control systems and response of the spacecraft so as to improve the stability and pointing accuracy of the platform while at the same time continuing to acquire HawkEye images and downlinking them via X-band at the NASA/Wallops Near Earth Network (NEN).

We are excited to share with everyone a recent HawkEye image that was taken on the 25th of May over a part of Indonesia known as the Flores Sea. Once again, this image demonstrates why we are all so very thrilled with what we have seen so far in these early engineering test images and with the opportunities that we believe the images from HawkEye will provide in helping us significantly improve our understanding of the ocean.

But first, let me set the stage. Below is a large scale map of the region with a portion of a true color MODIS/Terra image that was taken on the same day, superimposed. 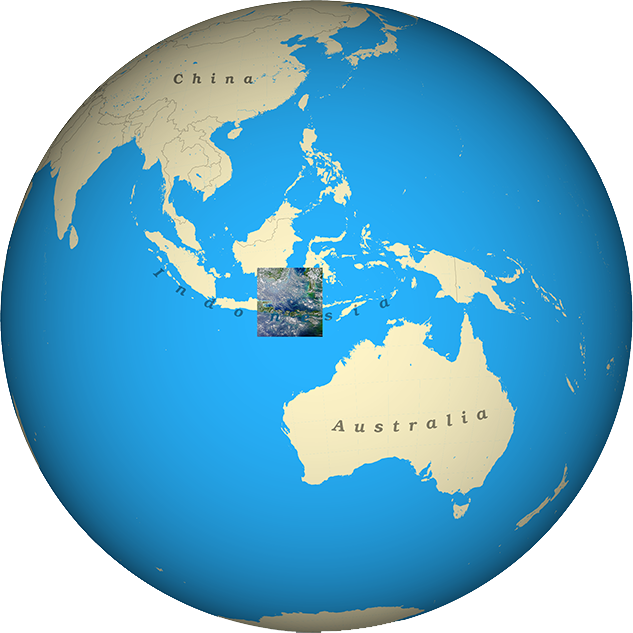 
As previously described, each HawkEye image is approximately 200 kilometers wide (across track) and 600 kilometers long (along track) with a spatial resolution at its current altitude of approximately 120 meters and here is the outline of the region of the Flores Sea that we requested be observed by HawkEye on that day. 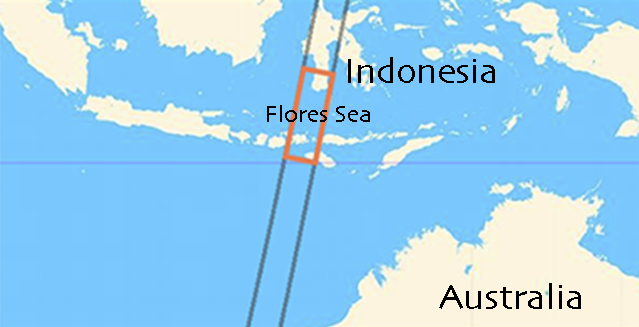 
This next image is the MODIS/Terra true color image from that day with the outline of the HawkEye-targeted region superimposed. While many interesting features are clearly visible, the image also reveals a few of the calibration-related issues that we see in MODIS/Terra such as the horizontal mirror-side stripes for example which are noticeable throughout the image but most clearly seen in the upper right. 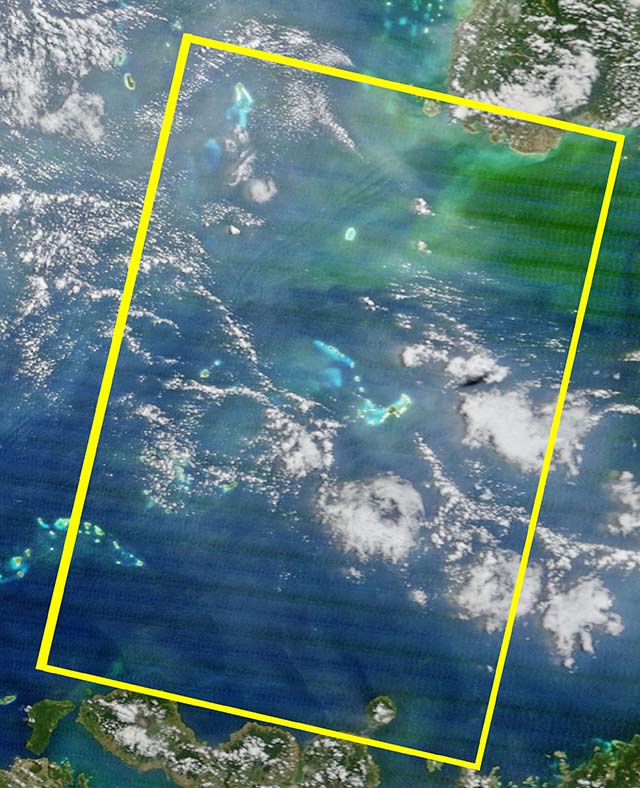 
Below is a reduced size version of the full HawkEye image inserted into the MODIS/Terra scene and here is a link to the full resolution HawkEye image of the Flores Sea. 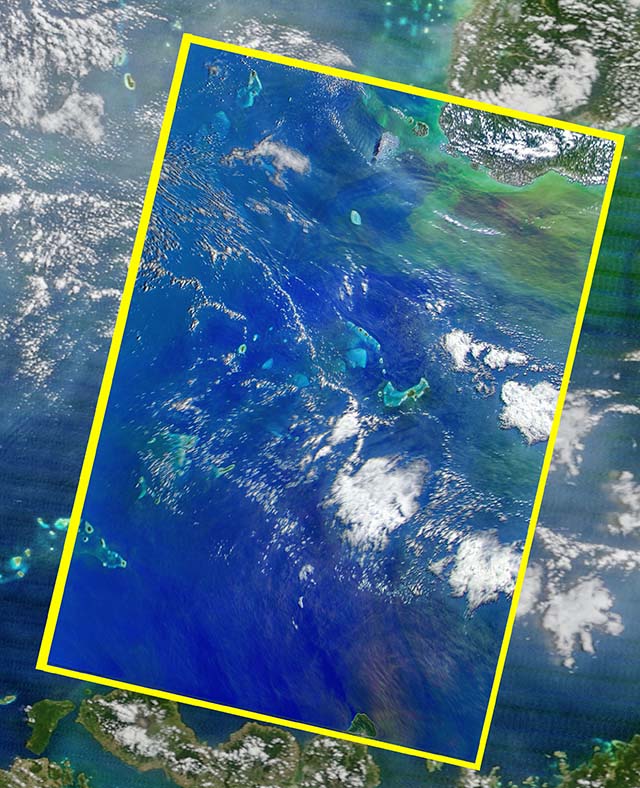 
In order to more easily and directly compare the two images, below I've inserted a portion of the full resolution HawkEye image into the MODIS/Terra scene that were taken within an hour of each other. The significantly improved detail that the 120 meter resolution HawkEye image (left side) provides is immediately evident in contrast to the approximately 1 kilometer resolution of MODIS (right side) and thankfully, the calibration issues seen with MODIS/Terra are not visible in HawkEye.

In addition to the beautiful gradations in the shades of color that we can see in the HawkEye image, a number of other features including perhaps surface and internal wave patterns are also evident that are obscured in the lower resolution MODIS image. 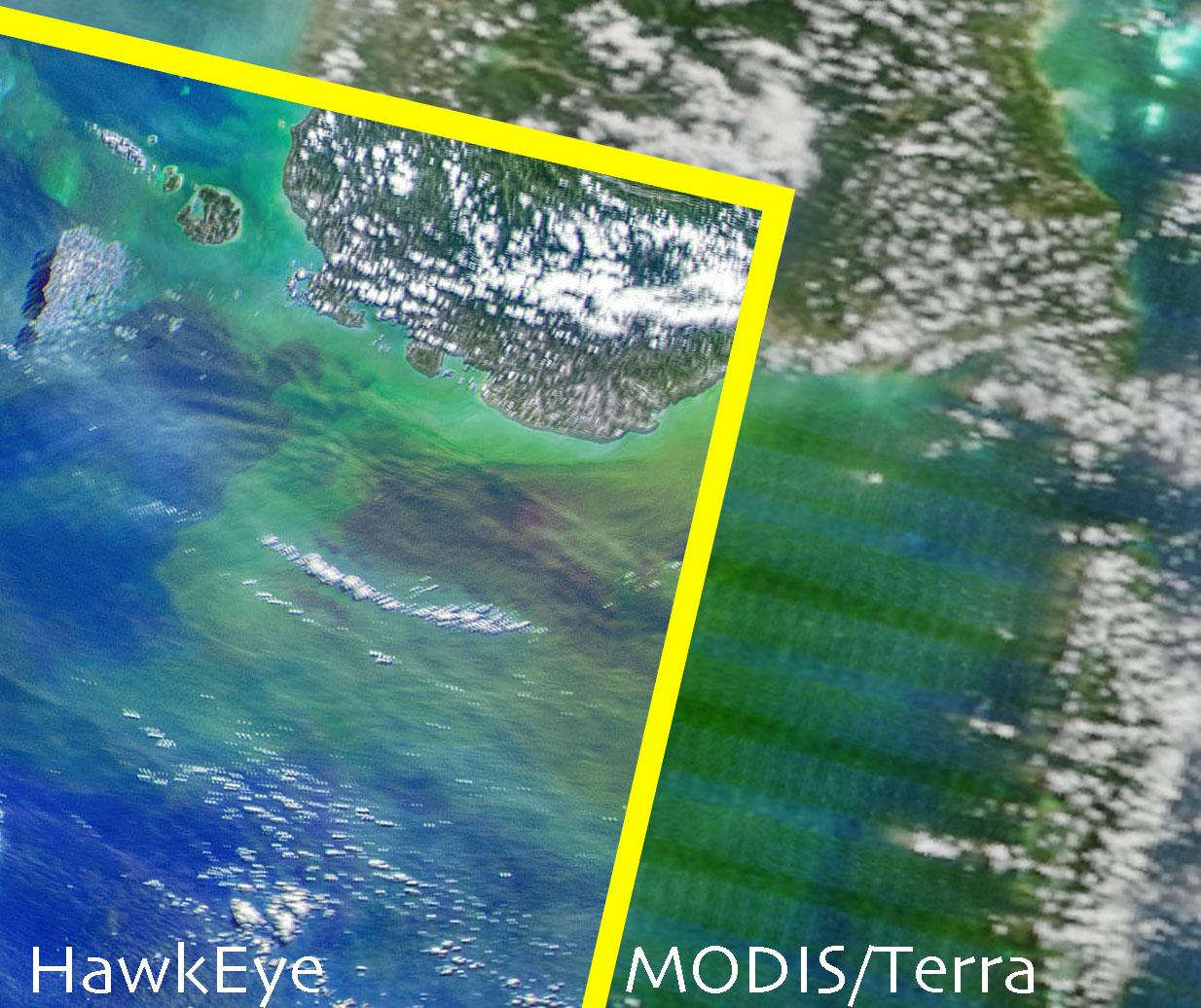 
One of the more interesting features that can be seen in the reduced resolution version of the HawkEye image presented above is the group of islands and atolls in the center of the image. These are the Sabalana Islands with a total area, including the large lagoon of approximately 2700 km², making Sabalana one of the largest atolls by total area. The land area of the largest individual island, Pulau Sabalana, measures about 7 km², followed by Pulau Banawaja with 3 km² and Pulau Sabaru with 1.4 km² which can be seen in the map below. 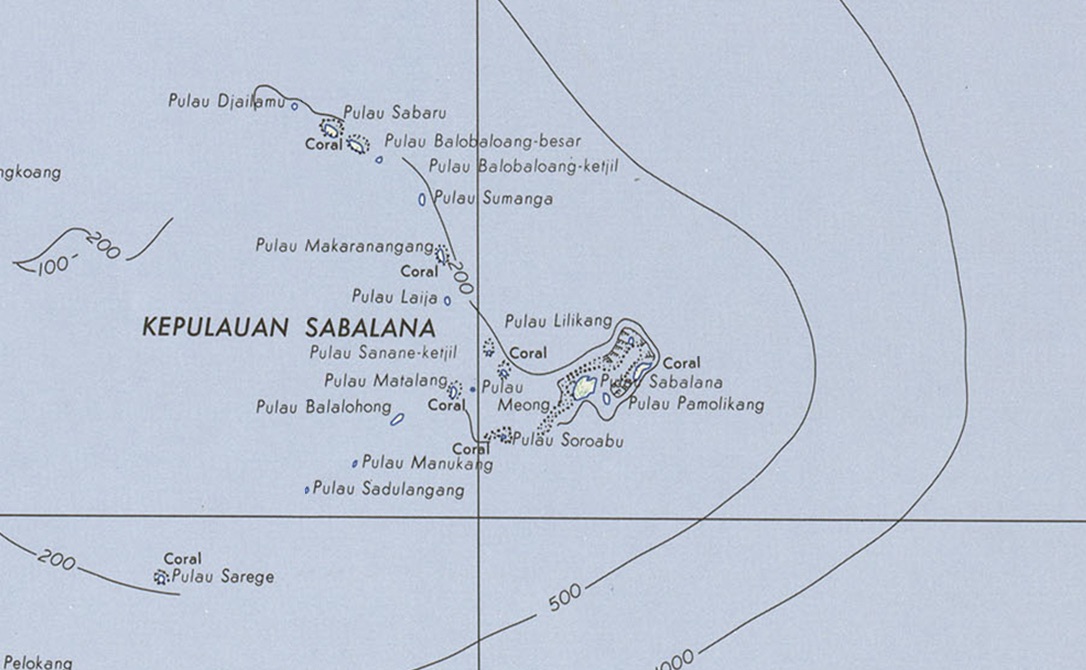 sabalana_islands_map_overlay.jpg (146.23 KiB) Not viewed yet


If we now look more closely at the MODIS/Terra image of these islands, you can see that they appear quite undifferentiated and indistinct while the surrounding waters are featureless and fairly uniform. 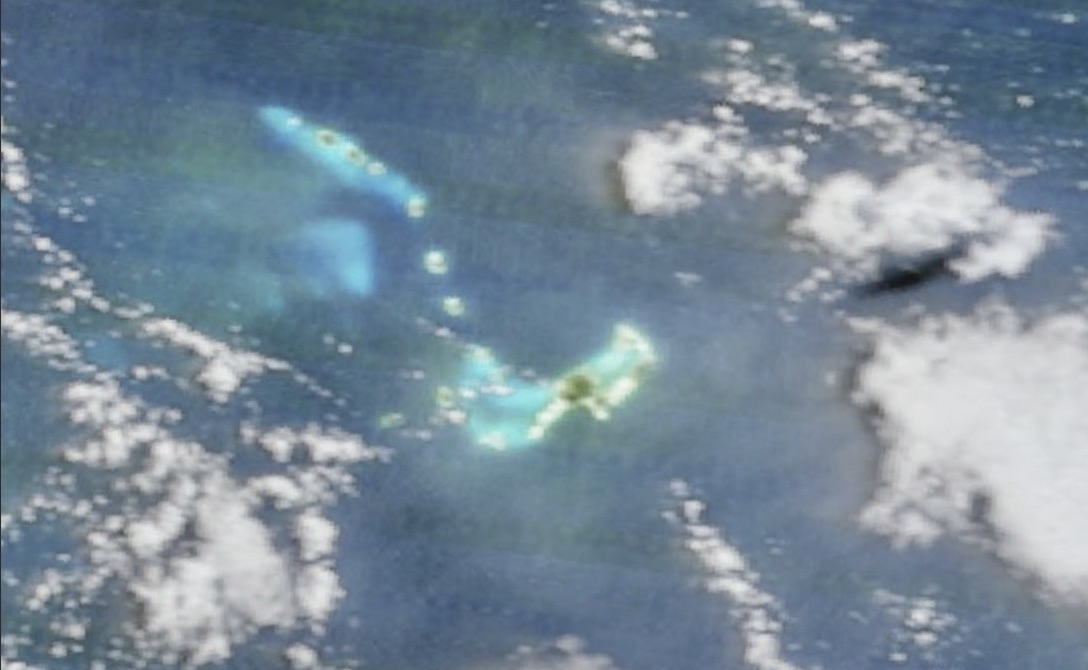 sabalana_islands.modis.terra.jpg (115.16 KiB) Not viewed yet


However, in looking at the HawkEye image of the islands, each atoll is clearly recognizable and subsurface sand features quite clear and surface wave patterns reflecting the islands influence are also seen. 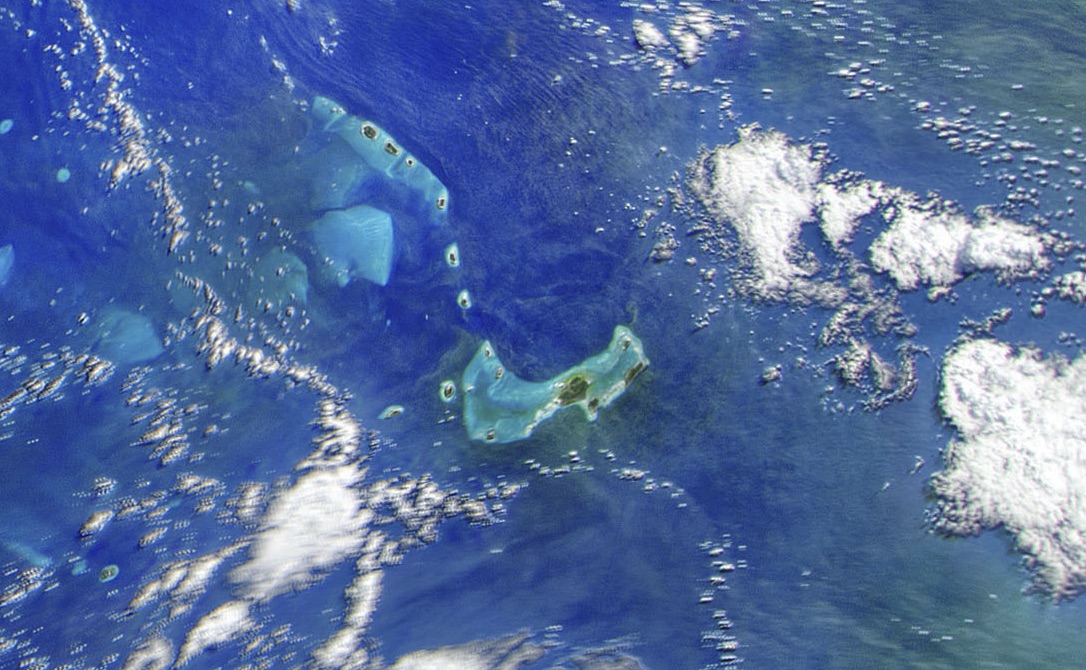 sabalana_islands.hawkeye.jpg (257.18 KiB) Not viewed yet


However, to give you an example of one of the things that we are still working on, if you look closely at different portions of the full resolution HawkEye image, you may notice that some areas are very sharp and the features quite distinct while in other portions of the image, it appears that some things such as small clouds and even an island appear to have three slightly offset representations. As mentioned in my earlier message, we are still in the process of commissioning and tuning the spacecraft's attitude determination and control system and we are closing in on the final set of adjustments that we believe should provide us with the stability and pointing accuracy that we desire. This apparent motion/blurring in the image is a result of the spacecraft's control systems moving too rapidly trying to adjust its attitude during an image acquisition with the movement being faster than the integration time of the three detectors that we use to attain the signal to noise that we want to be able to do the quantitative ocean color retrievals that we expect from HawkEye as we provided an example of in our first light image of Monterey Bay.

Below on the left is a small portion of the image taken near the top of the HawkEye scene and you can clearly see the impact of the spacecraft's motion during the image acquisition. However, just twenty seconds later towards the center of the scene, you can see how crisp and sharp the features of these tiny islands are, giving us a clear demonstration of how great an instrument HawkEye is.


One of the enormous benefits of the SeaHawk mission is that we will be able to take advantage of all the lessons learned that we are able to gather with this first spacecraft because, we have built TWO SeaHawk spacecraft and HawkEye instruments. The second spacecraft and instrument are currently spread across two workbenches at the AAC Clyde Space facilities in Glasgow, Scotland and are being used in support of SeaHawk-1. Sometime later this year or early next, the folks at Clyde Space will begin to assemble SeaHawk-2 in anticipation of a launch of the second mission sometime later next year with the hope of having both spacecraft flying together for some period of time. This will allow us to not only increase the number of observations that we will be able to take but also, will allow for a cross calibration between the two instruments. When I was recently at the workshop in Glasgow I was able to pay a visit to SeaHawk-2 and was encouraged to see that when I looked at the bottom of the second HawkEye instrument (see the picture below), that not only were the eight apertures of the optics and the the one of the finder scope carefully protected but also, there was a very prominent label that read RBF which in spaceflight terminology means REMOVE BEFORE FLIGHT. 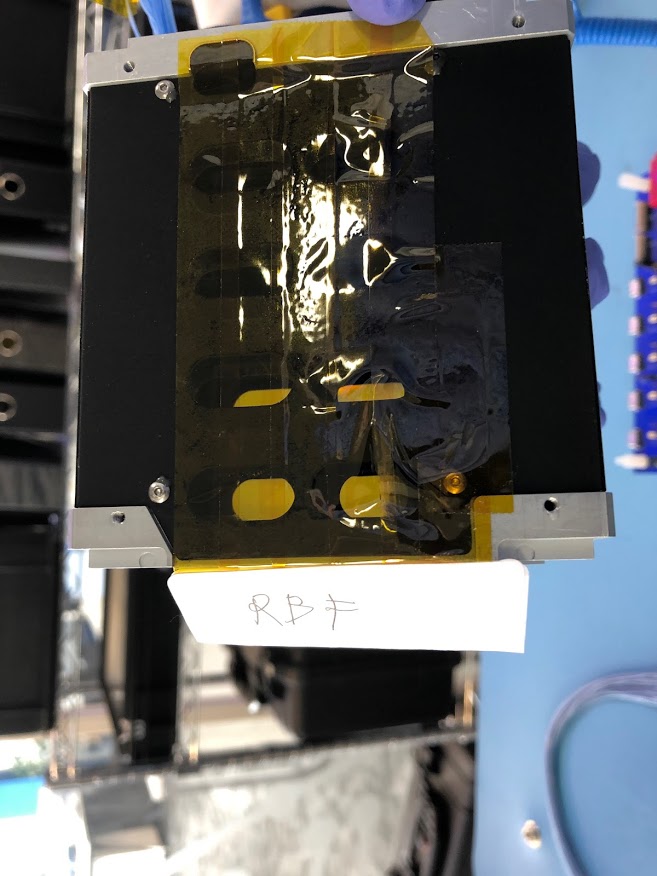 hawkeye_flight_unit.jpeg (93.98 KiB) Not viewed yet


For a more information about SeaHawk and HawkEye, please take a look at our mission's website at:

With our very best regards,