Hi,
I am currently trying to compare different datasets, trying to monitor Earth Energy Imbalance. I am comparing this quantity for ERA5 global monthly mean as the subtration between Incoming Shortwave Radiation and Outgoing Longwave Radiation and for CERES EBAF Ed 4.1. It appears that there is a sharp increase first in 2010 and then in mid 2012. I was wondering if you had any answer. Could it be due to new satellites (2011) ?
Thank you in advance,
Regards 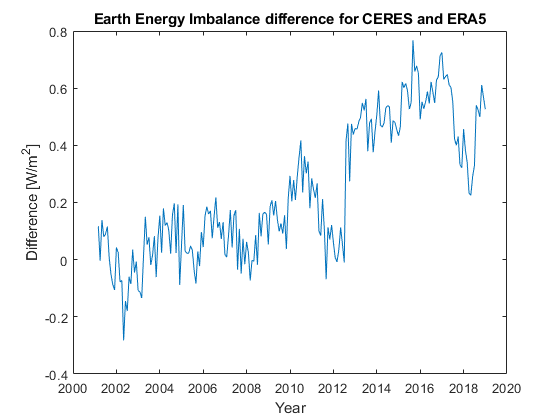 Thank you for your question. The CERES Subject Matter Expert was notified and will address your question shortly. Please check back.

The input sources CERES uses are documented at https://ceres.larc.nasa.gov/data/general-product-info/. The same CERES instrument, MODIS imager, and ancillary data was used throughout the period in question. The EBAF products also incorporated geostationary imager data in determining the LW all-sky flux. Starting with July 1, 2010, MTSAT-2 was used as a source in the East Pacific instead of MTSAT-1R. When there were gaps in MTSAT-2, MTSAT-1R was return to use. Also, GOES-13 replaced GOES-12 for the Eastern US on April 15, 2010. For brief periods, GOES-14 was used in late 2012. The information derived from geostationary imagery is normalized to the CERES values as part of the process.

The discontinuities in 2010 and 2012 in the CERES-ERA5 difference plot provided are more likely due to changes in the observation system being assimilated in ERA5 and/or changes in the ERA5 itself.
Top
Post Reply
3 posts • Page 1 of 1