Use this Forum to find information on, or ask a question about, NASA Earth Science data.
Post Reply
5 posts • Page 1 of 1

While working on MODIS (MxD11A2.061) 8-day LST and emissivity data in Google Earth Engine, out of curiosity, out team wanted to compare GEE product with AppEEARS product. So, 2021 January's scenes were downloaded from AppEEARS and decoded with ArcGIS MODIS-VIIRS Python Toolbox, and unwanted pixels filtered accordingly. During comparison, we realized that GEE products were having more masked pixels on land than data downloaded using AppEEARS. That led to checking quality band (QC_Day/Night) provided in GEE and these bands were found with large amount of missing pixels on land regions with labelled as "masked" - please see the screenshot of QC_Day band (Terra) on some parts of SE Asia. Checking different years' QC bands, including 2001 (for Terra), the masked pixels were found in all years. Please note, the QC bands of daily LST and emissivity product (MxD11A1.061) do not have such masked pixels.

The question was posted in gis.stackexchange and GEE Developers google group, but yet to receive any response. Meanwhile, GEE team confirmed that the issue is not on GEE's end. 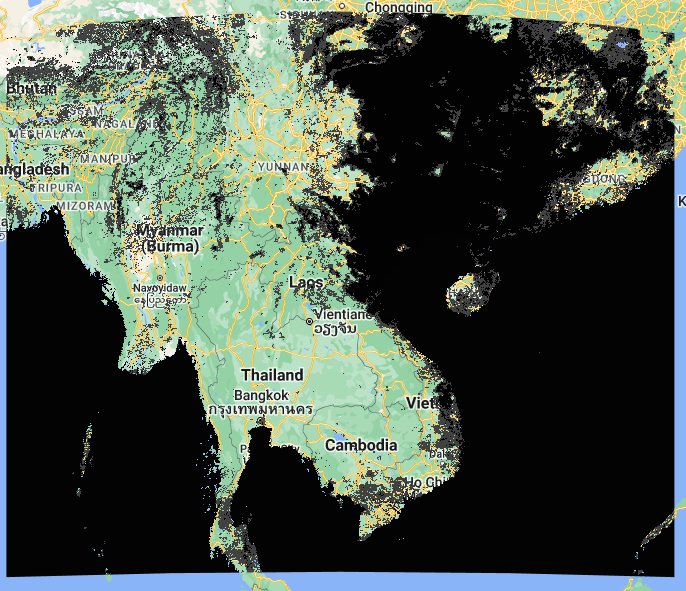 Could you please email your AppEEARS request ID and the criteria you are using to filter pixels to lpdaac@usgs.gov and reference this post in the email.

Thank you! - Danielle
Subscribe to the LP DAAC listserv by sending a blank email to lpdaac-join@lists.nasa.gov.

Sign up for the Landsat listserv to receive the most up to date information about Landsat data: https://public.govdelivery.com/accounts/USDOIGS/subscriber/new#tab1.
Top

Thanks for the reply. I shall collect the request ID from my teammate and email the info accordingly.

Meanwhile, a little update, I compared the QC bands collected using AppEEARS and GEE, and found that for the pixels categorized as masked in GEE, the AppEEARS data has value of "NoData" - meaning the mask is present in AppEEARS data as well.

We must have made some mistakes while creating the mask with criteria based LST error and Emissivity error and did not include those NoData pixels as mask, which led to LST values at NoData (of QC band) pixels to be included in output. Consequently, it led us to examine the LST products of both sources and subsequently found the mask in QC_Day/Night band.

However, the question remains, what are these masked pixels in QC band mean?

We have followed up with this user via the LPDAAC email, following is what we think the issue is:

Yes, the AppEEARS does incorporate the QC data into its output. The GEE is not ours, so I am not sure what they do. However, the MOD112A technically does not have a QC mask in its LST_Day and its LST_Night however they do use fill and the fill value is 0. This can be problematic. This is from the User Guide:

It should be noted that fillvalue 0 listed for the SDS QC in Table 9 is valid for the bit flags
only when a fillvalue 0 is present in the SDS LST pixels (so the 00-01 bits in the QC pxels
have a value of 10 or 11). A value of 0 in the QC bit flags means good data quality, cloud
free, or small error in emis_31 and emis_32, and etc, if a pixel has a valid LST value. We
do not discriminate fillvalue 0 from valid value 0 for all bit flags in the QC in order to
minimize the data volume. Users should read SDSs LST and QC at the same time in order
to properly interpret their values in an easy way.

Thanks very much for getting back! Yes, seems like the the fill value 0 containing pixels were getting masked out. I further checked the QC_Day/Night band and the Data_Quality_flag band (accessed via AppEEARS), and found that at the pixels were QC band was having "NoData" over land regions, the Data_Quality_flag band identifies those as "LST produced, good quality, not necessary to examine more detailed QA" - problem solved!
I should have been more attentive while going through the user guide.