Good Morning,
The past year has been an incredibly busy and productive one for our group here at NASA/Goddard and we wanted to figure out a way that we could keep the community informed as to the work that we have done, the projects that we are involved with, any updates to the products and data distribution mechanisms that we support and what may be coming up in the future. Consequently, we have decided to put out a short, quarterly e-mail message that highlights some of these topics and points to a more complete description with additional supporting documentation on the web.

SeaWiFS has not been collecting data since 14 December 2010. We had hoped that the underlying cause of the problem would have been identified and corrected by now but unfortunately, this situation is unlike any that has been seen before and despite the best efforts of GeoEYE, the spacecraft has not responded to their attempts to restore it to routine operations so far. GeoEYE is actively working on diagnosing and hopefully, correcting the problem with the spacecraft but at this time there is no schedule for when we are likely to see the results of this activity. We will be sure to send out an updated status report as soon as there is any additional information.

The Ocean Sciences Branch at GSFC has been renamed and restructured as the Ocean Ecology Branch. The branch now is dedicated to ocean color mission support, biology, and biogeochemistry and no longer includes other ocean disciplines such as physical oceanography. Elements of the branch include the Ocean Biology Processing Group, the Calibration and Validation Office, and Antonio Mannino's group and laboratory. Chuck McClain is now the branch head. Near term organizational goals include consolidating these elements, moving the field and laboratory staff to a single location and upgrading an existing laboratory to support the HPLC (to be transitioned from the University of Maryland/Horn Point Environmental Laboratory to GSFC this spring) and other chemical analyses.

SeaDAS version 6.2 was released and is available via FTP at:

This release contains all of the final processing programs (and source code)
used for the OBPG's Ocean Color Reprocessing 2010:

including the modifications for the MODIS Terra ocean color reprocessing:

In addition, this release includes support for 64 bit Linux. Our plans for a new version which we are calling SeaDAS 7 can be found at: 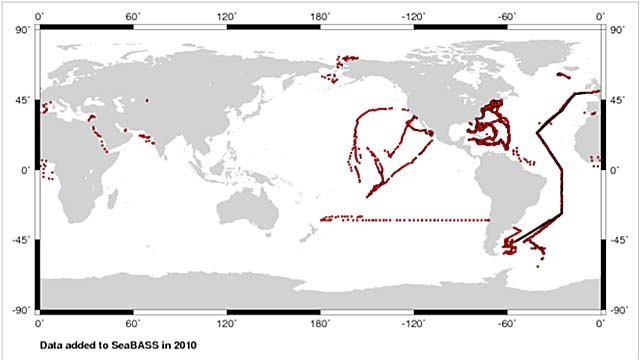 The Aquarius / SAC-D mission is being developed by NASA and the Space Agency of Argentina (Comisión Nacional de Actividades Espaciales, CONAE) and is currently in Brazil undergoing final environmental testing before being flown to Vandenberg Air Force base for a planned launch in June 2011. Information about the Aquarius/SAC-D mission can be found at:

Our group is responsible for the data processing and instrument operations of the Aquarius instrument and at this time, the most complete (launch) versions of science processing code for the radiometer and scatterometer have been received and implemented. We recently began the real-time mission science data simulation (December 6, 2010) with data running approximately 10 days behind "real-time" and level-1, 2 and 3 products being produced and made available via the web. These simulated data products can be found at:

As lead for NASA's VIIRS Ocean Science Team (VOST), we have provided substantial scientific input to the NPP project regarding the use of VIIRS to create science quality ocean color data products. We have assessed the NPP project and the VIIRS instrument's capability to produce science quality ocean color data products. A full report on our findings can be found HERE. We have also developed and will soon be putting into production a VIIRS data simulator, to further explore the impact of instrument performance on science capabilities.

As the NPP Ocean PEATE, we now have the capability for processing VIIRS Ocean Color and SST Environmental Data Records (EDRs) to generate Level-3 products in the standard ODPS format. Sample binned products can be found here:

Over the past three years, prototyping of the Ocean Radiometer for Carbon Assessment (ORCA) has been underway primarily through the NASA Instrument Incubator Program (IIP). Chuck McClain is the PI and Mike Behrenfeld is the science lead. Alan Holmes, the lead engineer on SeaWiFS during its design, fabrication, and testing is also a team member. The prototyping involves the fabrication of a flightlike simulator complete with scan mechanisms, optics, and, at this point, rudimentary focal planes and electronics. Over the past few months, the ORCA prototype has gone through optical alignment and initial optical performance testing and recently was shipped to NIST for a complete evaluation of optical performance (polarization sensitivity, straylight rejection, etc.). Steve Brown, a OCRA co-investigator, will lead the NIST effort with the assistance of Gerhard Meister and GSFC optical engineering staff who are also ORCA co-investigators. Funds to incorporate flightlike focal planes, electronics, and the data system were recently approved through a second IIP.
Tags:
Announcements
Aqua
Data Processing
MODIS
OBDAAC
OCTS
Ocean
SeaBASS
SeaDAS
SeaWiFS
Terra
VIIRS
Top
Post Reply
1 post • Page 1 of 1